How these sports nutrition champions knocked it out of the park with subscriptions and a product so good that no one wants to talk about it!
Brand
Xendurance
Industry
Sports Nutrition
Stat
13% AOV increase in the last 30 days
Migrated From
Recharge & Yotpo (Loyalty Rewards) 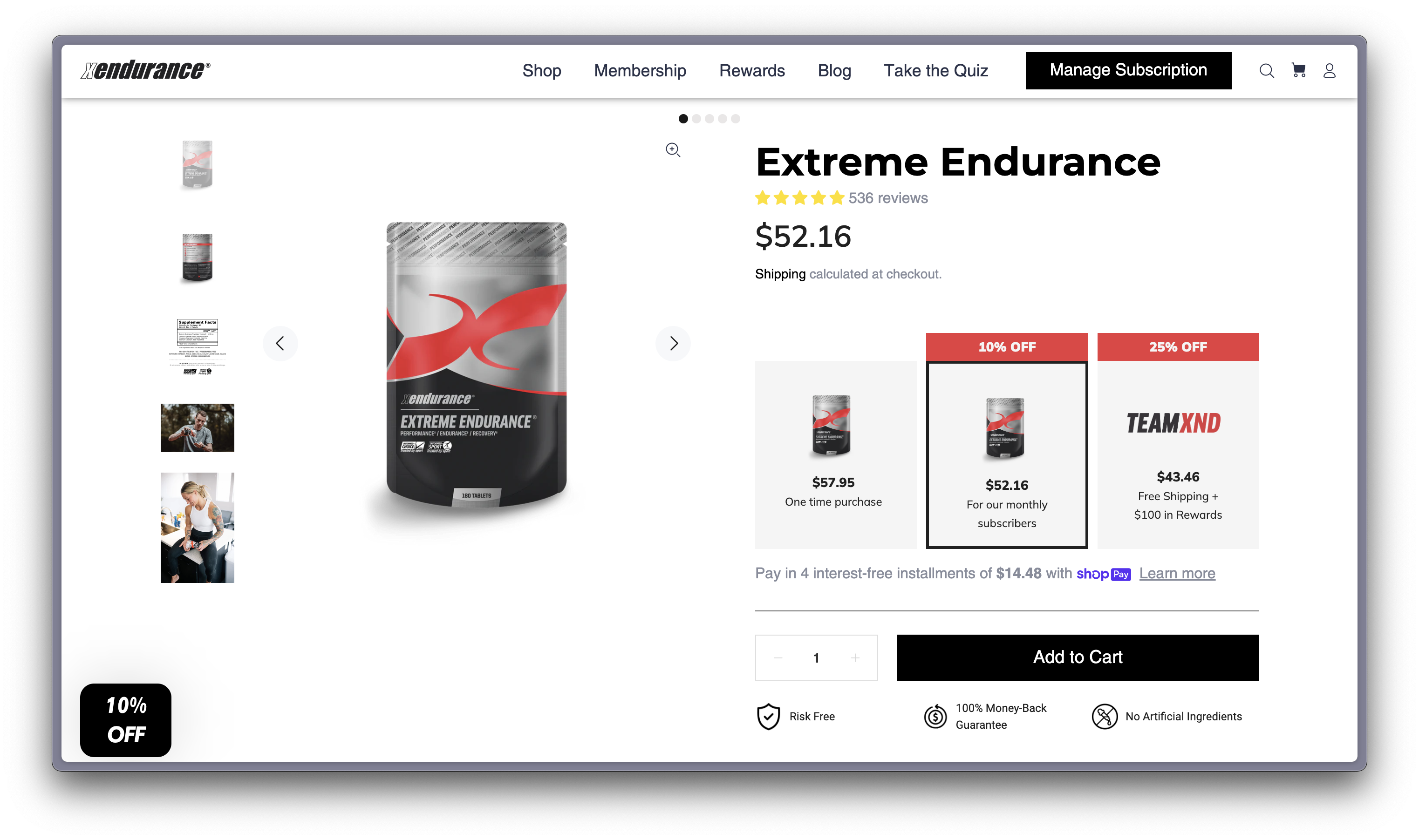 With a goal of transforming the sports nutrition landscape, Xendurance has grown exponentially, with a membership program of over 10,000 Team XND members and a 15% increase in subscriptions. We connected with Thor Kellin, Xendurance’s Director of Finance, for everything from creating a superior product to providing the ultimate membership experience!

As a professional bobsledder traveling across Europe, Sandy Kellin was disappointed in the little access he had to pharmaceutical-grade supplements, bringing him down the road of creating his own. Starting with a passion for finding innovative ways to help people perform at their best and live longer, healthier lives, Sandy strived to create the perfect product, founding Xendurance in 1998.

With so many brands in the supplement and nutrition industry making claims that they cannot substantiate, finding supplements that are scientifically proven and reliably manufactured has been a huge pain point for consumers. To beat this, Xendurance stepped up to the plate using only the purest ingredients under the highest standards, backed by scientific research. Currently, on their third double-blind placebo-controlled crossover study, Xendurance continually works with third parties to test product performance. Their products have been proven in clinical trials, on both athletes and others, to enhance dozens of biomarkers, completely validating their claims and differentiating themselves from other sports nutrition companies.

Offering such an effective product that has played a hand in countless athletes winning major competitions brought along one complication: athletes don’t want to share their playbook with competitors. Xendurance’s first real break was when Olympic swimmer, Jason Lezak, won the gold medal and set a new world record at the 2008 Summer Olympics. While this confirmed how effective their product is, Jason declined publicly sharing that he was on Xendurance for 3 months before the Olympics, forging the battle between having a product that’s so good, no one wants to talk about it.

The heightened popularity of Crossfit really took hold of the brand. With the large communities of gymgoers willing to help others improve, Xendurance’s effectiveness spread like wildfire. Since then, pretty much every podium finisher since 2013 has been on at least their flagship product, primarily on a non-sponsorship basis.

Prior to 2018, Xendurance was sold primarily in gyms and health and nutrition retailers but later decided to bring everything in-house. With goals of providing the best shopping and product experience possible to ensure their customers are taken care of, the Xendurance team pivoted to focus 100% on DTC, allowing them to own the entire brand experience.

Coupled with their DTC launch, they also launched Team XND, a subscription membership program with incredible perks. Members receive benefits such as free shipping with every order, 25% off every product, special products and apparel, exclusive discounts and offers from 50+ partners – which has allowed them to create great relationships with their MVP customers!

Over time, their membership program has morphed quite a bit, with members now receiving two $50 coupons upon enrollment to emphasize how customers break even (or more!) on their first order. The XND membership program is a huge element of their business with over 10,000 members to date.

Originally launching subscriptions on Recharge but encountering issues with different pricing structures and a lack of initiative taken to improve upon these losses, Xendurance migrated to Smartrr. Always prioritizing providing the best customer experience, Smartrr caught Xendurance’s eye with the ability to elevate their membership program structure with greater functionality.

“Smartrr is pushing the needle and always trying to improve the customer experience, which is our greatest priority. If we’re not continually improving for our customers, then they’re going to move onto another brand.”
– Thor Kellin, Director of Finance at Xendurance

Thor praises Smartrr’s advanced analytics for allowing them to look for subscriber trends and ensure that they are moving in the right direction with their subscription program. With their major focus being on growing subscriptions at this stage in the game, Thor primarily looks at new customer growth versus churn month over month. Smartrr’s Retention Actions feature has also been a game-changer for the brand in reviewing customer feedback and course-correcting their offerings as needed. In the past month, Xendurance’s AOV is up by 13%! Not only that, but Xendurance has also seen a 15% increase in subscriptions in the last 90 days.

Additionally, Xendurance takes advantage of our Klaviyo integration with numerous custom flows for subscription orders. The most impactful flows are the membership failure confirmation and product subscription failure that triggers on any failure. Both emails are fully personalized and provide simple directions on how to re-enable their product or membership subscription.

Xendurance is the front-runner in providing an exceptional subscription experience for customers. A combination of launching great products, offering an amazing membership program, and even getting over 80 percent of orders to customers’ doors within two days of the order being placed, really allows for Xendurance to win.

“Our focus on how to make the membership and subscription more valuable is simply by focusing on having more incredibly high-quality products that people must have on an ongoing basis.”
– Thor Kellin, Director of Finance at Xendurance

In the new year, Xendurance has some exciting things in the works, like revamping flavors and launching a new product line! Xendurance also looks to migrate away from Yotpo to the Smartrr loyalty program in the first quarter of 2023.