We caught up with the Freestyle team to hear about their pursuit of a more sustainable diaper and how subscriptions have elevated their retention program.
Brand
Freestyle
Industry
Diapers
Stat
109% increase in active subscriptions
Migrated From
Recharge 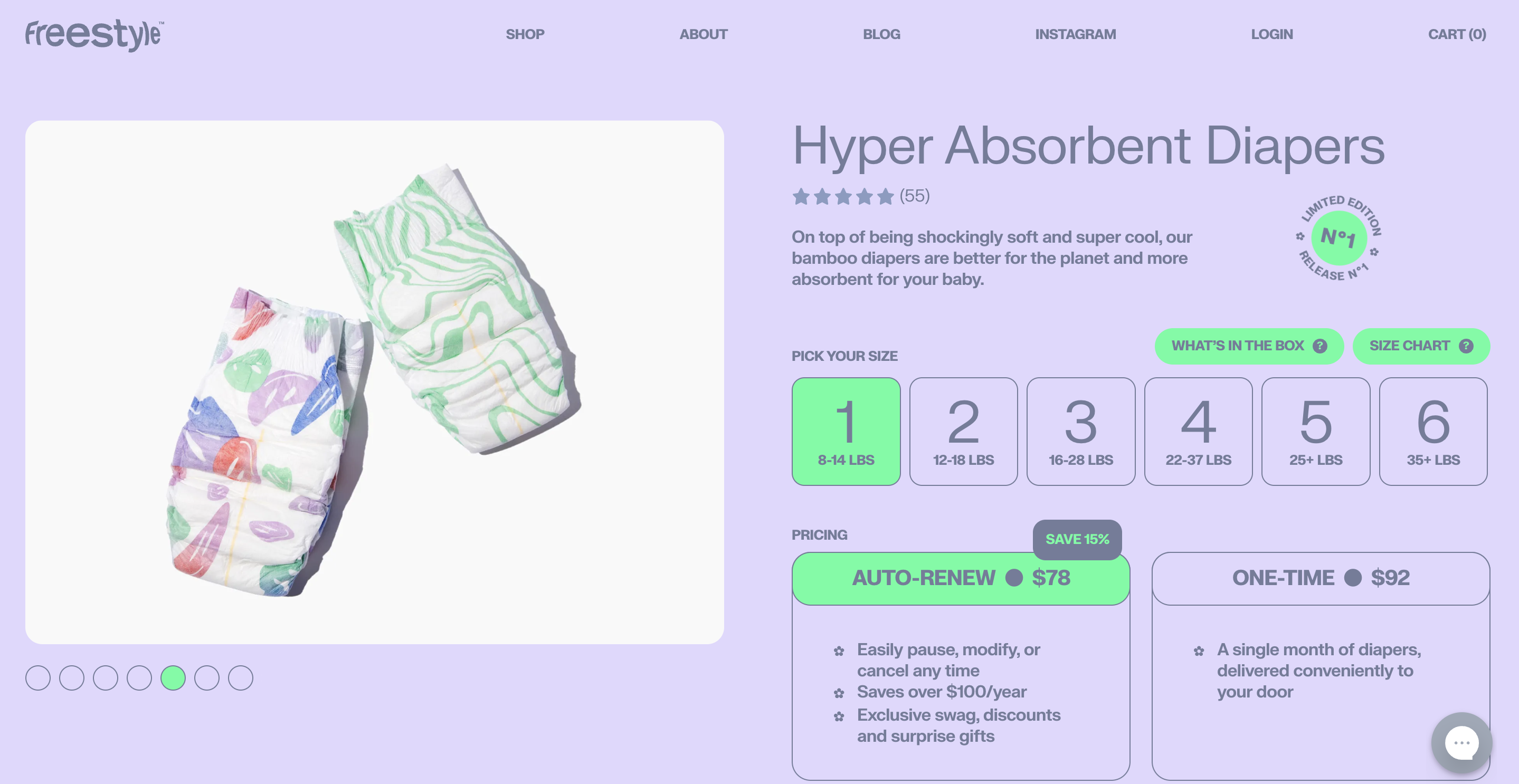 The Birth of Freestyle

After connecting through a mutual friend, Mike Constantiner and Russ Wallace began their journey as co-founders by discussing different ways to approach parenting from a consumer and brand perspective. Once realizing that moms are the ultimate consumer in the space and utilizing Russ’s background from a previous diaper brand he helped launch, Freestyle was born.

With a goal of wanting to give diapers a new life, Freestyle’s diapers are as creative as they are effective and sustainable, with their website stating, “for us, caring about our kids translates to caring about our environmental impact.” While every other diaper brand on the market uses tree pulp which generally takes 20 years to grow, Freestyle took a different approach with bamboo, the fastest growing plant on Earth. By partnering with a manufacturer who mills organic bamboo, Freestyle became the first tree-free diaper brand on the market. Not only are Freestyle’s diapers a more sustainable diaper option, but they are also 55% more absorbent and 88% biodegradable.

The A-B-Cs of DTC

When creating the brand, the Freestyle founders had a vision of building a retail-friendly business model that would allow them to expand to retailers such as Target. While the diaper business is trending toward direct-to-consumer, 90% of diaper purchases are still happening in retail. Mike applauds the DTC channel for its flexibility and ability to test and learn which has directly enhanced Freestyle’s performance.

“DTC is the one channel where you control your own destiny. It gives us the opportunity to be accessible and to test and learn. All the things that we do on the DTC side translate to what we put on our packaging, how we talk to retailers about our customers, who our customer base is, and what they love about our product.”
‍- Mike Constantiner, Freestyle Co-Founder & Head of Brand/Community

Because kids are in diapers for 2.7 years on average, crafting a membership program where customers subscribe to receive a fresh supply of diapers at their door each month just made sense for Freestyle. Originally launching with Recharge but getting fed up with being its babysitter, Freestyle migrated to Smartrr because it’s the ecosystem's most natively compatible subscription app and offers the most robust out-of-the-box feature set. In addition, Mike attributes Smartrr’s clear dashboard as one of the largest differentiators from other subscription apps, in addition to the various customizable subscription features that Smartrr offers, features that grant brands the opportunity to continuously elevate their subscription programs.

“Smartrr was thinking about subscriptions in a much more fresh approach than Recharge, who had built-in baggage from being around for a while.”
- Mike Constantiner, Freestyle Co-Founder & Head of Brand/Community

Starting off as subscriptions only, Freestyle later added the option for one-time checkouts, but to their surprise saw a decrease in sales when customers felt like there were too many options. In response, the brand increased one-time purchase prices while discounting subscriptions even more, overall increasing both AOV for one-time purchases and active subscriptions, making it a win-win solution for the brand. With Smartrr’s intuitive customization abilities, Freestyle was able to course correct and adjust its discounts accordingly to incentivize opting into its subscription program and reward subscribers for their loyalty. To further reward and delight subscribers, Freestyle includes surprises in their shipments, such as small gifts and early access to limited edition accessories and merchandise.

Mike cites that the most important thing in providing the best subscription experience for customers is understanding your own metrics, living in the dashboard, and always testing your offering. Primarily, Freestyle measures success by looking at active subscriptions and retention rates, comparing month-by-month. Mike commends Smartrr for making the subscription account signup process incredibly simple for customers, allowing them to checkout as they would in a normal Shopify checkout, and granting them the ability to manage their subscription in Smartrr’s intuitive customer account portal, customized to fit the Freestyle aesthetic. Greater than 50% of Freestyle customers opt-in for its subscription program versus buying a la carte.

“As we pitch, one of the things we talk a lot about to retailers when they ask us about our product is our reviews and customer feedback, but I think the strongest signal is customer retention rates on a subscription basis. Our retention rates are 2 to 3 times better than what a lot of our top competitors are seeing in the DTC channel, which shows that what we’re offering is truly resonating with our customers.”
- Mike Constantiner, Freestyle Co-Founder & Head of Brand/Community

Since July, Freestyle has increased their active subscriptions by 109% and AOV by 18%.

Additionally, 70% of their orders are subscriptions, amounting to 74% of revenue.

They Grow Up So Fast…

Being almost 4 months old, Freestyle has primarily been focused on why people choose to purchase from the brand, customers’ likes and dislikes, and which strategies are most effective. As a consumer-driven brand, Mike takes frequent one-on-one phone calls with customers to understand who they are, how they heard about Freestyle, and what they are looking for in a diaper brand.

Moving forward with a crawl - walk - run approach, Freestyle aims to optimize its website for conversion rates, eventually hoping to get more granular by segmenting customers based on attributions such as the month a customer subscribed, if any discounts were applied, or which marketing campaign brought them over.